Guild Battle is a Guild vs. Guild battle for the ownership of areas in the Brakion continent.

2. A King's Token is required to enter the Guild Battle.

■ How to Guild Battle

1. Apply for the Guild Battle 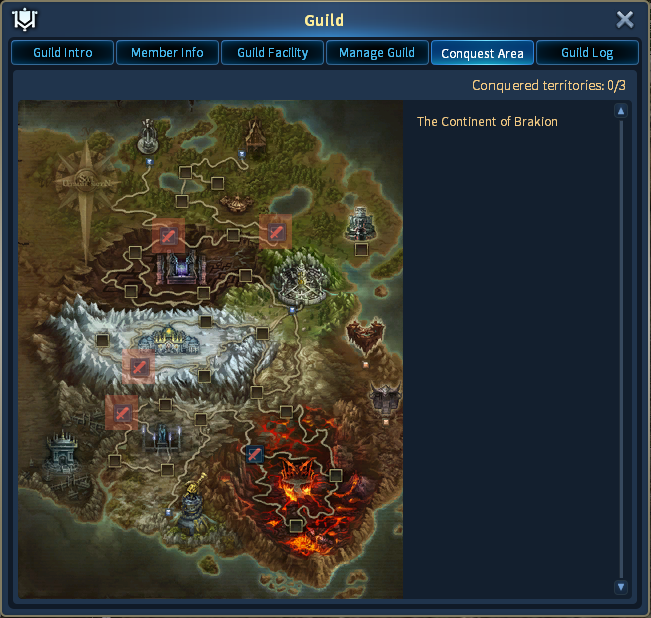 3) Two guilds will match for an area based on the guild combat score.

- For an empty area, two guilds with the highest guild combat score will match.

- For an area with defending team, the match will be between defending team and the guild with the highest guild combat score among the applied guilds

(matching information will update on every midnight during the application stage, and other guilds cannot apply for attack for the area where match is fixed).

Guild Combat Score is calculated with various criteria such as guild level and equipment rating of the top 20 guild members.

4) Once the match is set, match information will be show on the temple passage UI.

5) You cannot apply for attack ally’s area or area of your own.

2) only 20 (including 5 from the alliance) can participate in the guild battle.

1) Brakion Guild Battle will be on for 30 minutes.

3) You will get the point by capturing the base or killing other players.

4) Each captured base will give 10 points for every 10 seconds.

5) Kill other players will give 1 point.

6) Capture status of the base has two stages, and you need to complete all stages to earn points.

7) When player leave the map, player’s guild will lose 200 points.

8) Lost points from leave will not recover even the left player is back to map.

2) Guild which earned higher points by end of the battle time.

1. Pendant to summon a lucky monster in any area

2. You need to kill the summoned lucky monster in the blood temple to earn rewards.

3. Guild Battle rewards will send to the event inventory on every Monday.